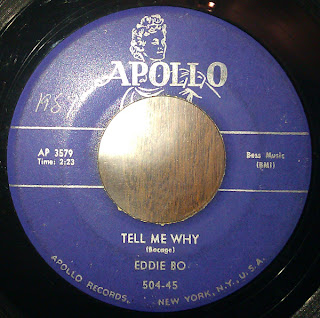 For the fourth and last installment in my series of posts on Eddie Bo, I thought we'd change up the styles again.  Eddie Bo put out many flavors of tunes over his career, so why not sample a few.  We heard how Eddie can Rock, we heard some very New Orleans R&B flavor, and we heard some glorious Funk.  So today we've got a bluesy ballad for ya. "Tell me why?" Eddie demands to know. "Why did you do this to me?" Getting your heart broken sure does hurt, but boy some good music can come of it.
Based in New York City, Apollo Records was started by Ike and Bess Berman in 1945.  Although the label initially put out music in a variety of styles, they settled on R&B in the early fifties and are particularly remembered for vocal R&B groups like The Five Royals and The Larks. I believe the label folded in '59.

Thursday the 28th, come out to Huckleberry Bar for great drinks and great music! 10PM til late late. 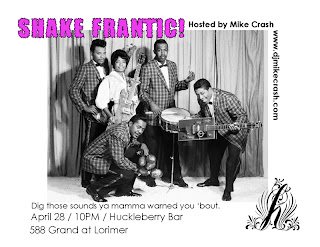 New set for the month is up! Some gems from my Chess and Checker collection. From the city I grew up in the shadow of - Chicago. 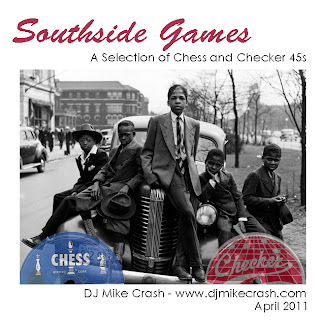 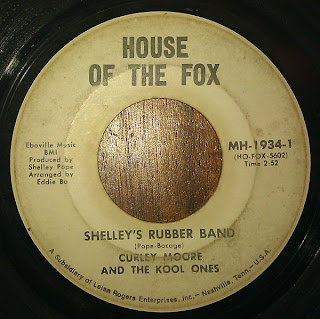 This week's 45 is yet another in the series of Eddie Bo records.  Although credited to "Curley Moore And The Kool Ones", this one's got Eddie Bo all over it.  Great funk for the dancefloor, with some springy reverb used to amp up that rubber band groove.  There's a tune by the Meters called "Stretch Your Rubberband" and a tune by Eddie Bo called "The Rubber Band" - was this a dance?

Check out this post at Funky 16 corners for some info on Curley Moore, I actually don't own any other 45s by him but I'm on the lookout.
I couldn't find any info on the House of the Fox label, or Leian Rogers Enterprises.  Please pass it along if you have some!
Now get funky!

This Friday at Motor City - let's get craze! 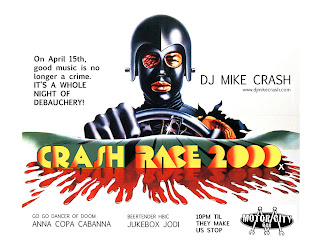 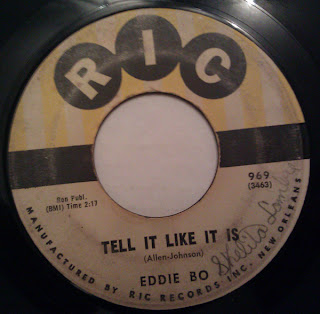 This is the second post in our series of Eddie Bo 45s, check this post for biographical info on Eddie Bo, and check the "bocage" tag for all the posts.
"Tell It Like It Is" is one of my favorites, Eddie Bo perfectly captures that New Orleans parade vibe and the music forces you to march around the dancefloor.
Ric Records was a New Orleans record label active in the early 60s that released tunes from most of the local RnB artists of the day.  For detailed info, peep the Wikipedia article I authored here, and check this link for a complete discography.
Now let's take it to the streets! 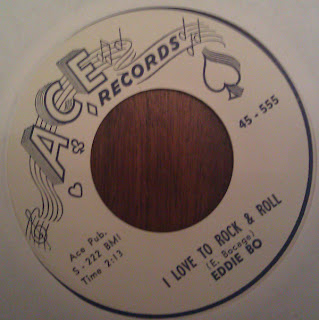 How is it possible I haven't covered an Eddie Bo record here yet?  This guy was a giant, seriously one of the most under-appreciated musicians to come out of New Orleans.  And to say he was prolific is an understatement - he easily put out over 50 singles, writing/arranging/performing for most of his adult life. I have a grip of his releases, but instead of posting them all today I thought I'd institute  a "bocage" tag and post one every now and then. So let's do this! 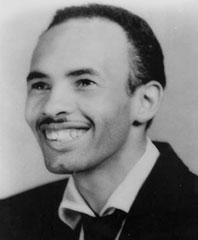 Edwin Bocage was born on Sept 20th, 1930, and was raised in New Orleans, Algiers and the 9th Ward to be specific. Many of the male members of his family labored by day, but were musicians by night; and his mother was a self-taught pianist and friend to Professor Longhair.  After a short stint in the Army, Eddie came back to New Orleans and studied music at the Grundwald School. First starting in Jazz, he soon moved into the exploding RnB scene.
After his first recorded performance, a single for Ace Records  (Al Collins' "I Got The Blues For You Baby") in '55, Eddie Bo began releasing a steady stream of material - a long streak of music that spanned over 40 different labels and as many years. There were only a few chart hits - "Check Mr Popeye" (a novelty dance tune that spawned a dance to rival the twist in NOLA) and "Hook And Sling" (a drum-heavy funk monster) were probably the biggest. He passed away after a heart attack on March 18, 2009. It pains me to think that I was in New Orleans a few times when he was alive and never made it to his "Check Your Bucket" club. Today's tune is a dancefloor Rock tune that showcases Eddie Bo's wild side at it's best.
Johnny Vincent started Ace Records in 1955 after getting his start at Specialty Records.  Headquartered in Jackson, MS, Ace released plenty of important New Orleans RnB and Blues, featuring such artists as Earl King, Frankie Ford, Jimmy Clanton, Huey "Piano" Smith, Joe Tex, Scotty McKay and Bobby Marchan. I believe Ace went under when it's distributor VeeJay did, in '66.
For further reading on Eddie Bo, check out his offical site for the biography, but record hounds need to check this amazing site which illustrates Eddie Bo's discography nicely.
And of course, the clip: