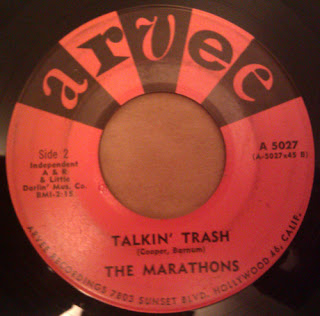 Novelty tunes - what happened to 'em? Today's 45 is a weird number from The Marathons, actually both sides are novelty tunes.  The flip is "Peanut Butter", a song singing the praises of our favorite nut paste, and was the more popular of the two.  I like this side for the naughty edge it has.  It's simply one character trying to seduce a young girl, who does nothing but giggle in response.  By the end of the record, her dismissive laughs anger the suitor, who finally gives up. It's actually pretty annoying, but I suppose that's the point: by the end you are just as annoyed as the suitor.
The Marathons were really a psydonymn for The Vibrations, who were under contract with Checker.  When it was discovered they were recording for another label, a lawsuit resulted, and Checker released their own version of "Peanut Butter".  These same folks charted with "Stranded In The Jungle" earlier under the name The Jayhawks (we covered The Cadets version of that song here). 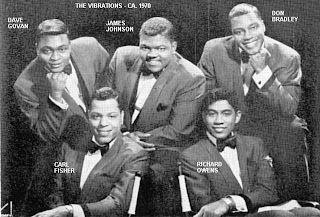 As far as the Arvee label, here's a blurb from "West Coast Sock Hop", an Arvee compilation I came across:
"Richard Vaughn founded his Arvee Records (his initials formed the label's name) imprint in Los Angeles in 1959, and thanks in part to loose-limbed productions by H.B. Barnum and Marty Cooper, had hits right out of the box with frat party R&B acts like the Olympics and the Marathons, and although party R&B tracks (often with deliberate novelty appeal) remained the label's bread and butter, Arvee also dabbled in rock & roll, doo wop, and instrumental surf music."
I first encountered this tune on the wonderful "Talkin' Trash" compilation, but it was misattributed to The Olympics. Have a listen!

No comments:
Email ThisBlogThis!Share to TwitterShare to FacebookShare to Pinterest
Labels: novelty, vinyl 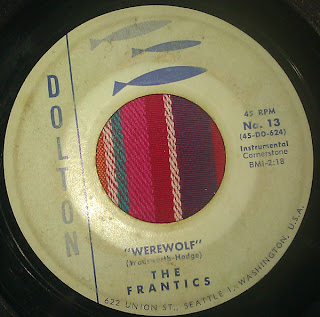 This is a classic tune, basically a standard amongst a certain set of bands.  It influenced The Cramps' "Don't Eat Stuff Off The Sidewalk".  It was covered by Los Straitjackets.  The Ventures played it note-for-note and retitled it "The Fourth Dimension". I got in on the action too. So who were the original men behind the music? 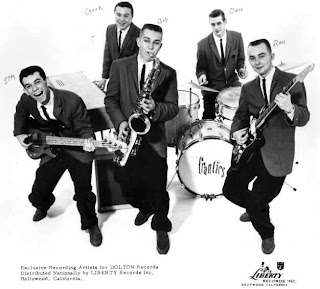 The Frantics were based out of Seattle, Washington and were active between '55 and '65. Ron Petersen and Chuck Schoning started as a duo in jr. high, and the band grew from there. By the late 50's they were recording what would become their classic material with Dolton. The two most well-known cuts are probably "Werewolf" and "Fog Cutter", but "Straight Flush" also charted. In the 60's, the band line-up was shifting and thier sound drifted towards the RnB side of things. By '65, they disbanded. There's a great collection of info at this site for those who want to dig into it further.
Dolton was a Seattle-based label started by Bob Reisdorf and Bonnie Guitar, and was active until '67. First called "Dolphin", they changed the name after a few releases to avoid confusion with a Laurie "Dolphin" subsidiary (but they kept the fish in the logo). Aside from The Frantics, other acts included The Ventures, The Fleetwoods, and Vic Dana. Avnet scooped up the label in '63 and in '65 it was merged with Liberty. It was finally closed in '67.
Most of the other songs in The Frantics catalog seem to be of the tamer teen variety, but this one is tough and eerie. Have a listen: 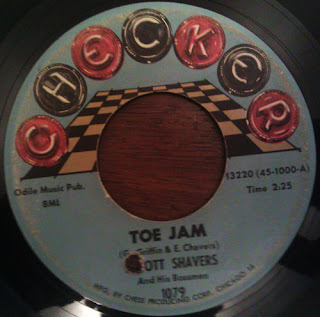 Today I've got another R&B stormer from one of my favorite labels, Checker. Not much info out there on this cat, but I've come across some other great tunes by Elliot Shavers "and his Blazers".   Blazing indeed, both sides of this 45 will burn up a dancefloor.  The flip, "Rice And Gator Tails", is no slouch; but this is the side that really does it for me.  Have a listen: 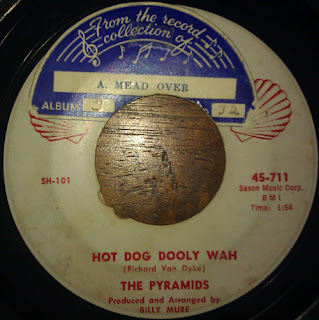 How about some kinda silly and upbeat doo-wop? Well, that's what you're getting.
I could find no info on The Pyramids.  Anyway, this is a finger-poppin' tune about a girl that's a great cook.  Obviously such praise can only elicit a response of "HOT DOG DOOLY WAHHH!"
Not a whole lot of info on Shell Records out there.  I gather from this discography that today's 45 was the first release for Shell Records.  Looks like they were active till the mid-60s at least.  The label indicates some involvement with Saxon Music, both Shell and Saxon were under Allied Entertainment of New York.  A short note in the November 10, 1962 Billboard Magazine, announcing that Allied was going public, also notes that Allied was formed by Dr. Herbert Breger in '61.  That's all I got.