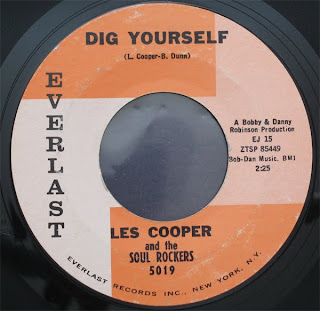 Les Cooper (b. Mar. 15, 1931, Norfolk, Virginia) was an American doo wop musician, best known for his hit rock instrumental "Wiggle Wobble".
Cooper sang in several New York doo wop groups, including The Empires and The Whirlers, and was the manager of the group The Charts. In 1962, he signed to Everlast Records and released the single "Dig Yourself" b/w "Wiggle Wobble", billed with his band as Les Cooper & the Soul Rockers. Both sides were produced by Bobby Robinson. The B-side was an instrumental featuring the saxophone playing of Joe Grier (formerly of The Charts himself); it caught on at radio and became a nationwide hit, peaking at #12 R&B in 1962 and #22 on the Billboard Hot 100 early in 1963. It was his only hit; one of the follow-up singles was the sonically similar "Let's Do the Boston Monkey", recorded for Enjoy Records. (thanks Wikipedia!)
All of the tunes mentioned above are available on this CD for those interested: Wiggle Wobble 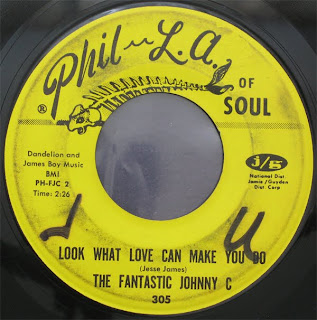 Today's tune is from another Philly-based musician, Johnny C.  This record is best known for the flip "Boogaloo Down Broadway".  "Boogaloo" is basically the same song as "Look What Love", but with a different set of vocals. And since everyone likes to talk about "Broadway", I thought you like to get a taste of the equally funky flip-side. 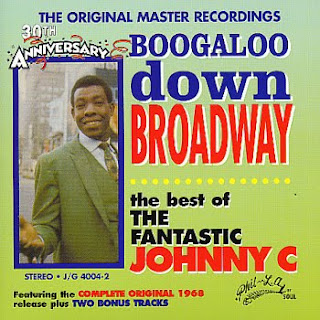 From the All Music Guide:
The Fantastic Johnny C was born Johnny Corley on April 28, 1943, in Greenwood, SC. He joined the armed services at an early age, leaving Brewer High in Greenwood before graduating to enlist. When his military duty ended, he moved to Norristown, PA, a small city 18 miles from Philadelphia, and found work as a heavy-equipment operator while becoming increasingly unable to resist the temptation to sing professionally. R&B producer Jesse James attended the same church as Corley and quickly spotted his talent. James made a career out of transforming gospel singers into secular performers; he discovered Cliff "the Horse" Nobles a short time later at the same church. James became Corley's manager and wrote songs for him -- one of them, "Boogaloo Down Broadway," convinced Corley to give pop music a serious try. "Broadway" became a big hit, hitting number five on the R&B charts and number seven on the pop charts. The follow-up, "Got What You Need," didn't surpass or equal "Broadway," but it did chart, while "Hitch It to the Horse" bounced onto the R&B charts, and even crept into the pop Top 40, in 1968. His stage name came about when some acquaintances of both James and Corley stated almost in unison, "That's fantastic -- what are you going to call him?" after hearing "Boogaloo Down Broadway." Hearing their response, James first came up with the Fantastic Johnny Corley before shortening it to the Fantastic Johnny C. His first gig was at the Uptown Theater in Philadelphia, sharing a bill with Sam & Dave, the Vibrations, and Joe Simon. Phil La of Soul released his only album, Boogaloo Down Broadway, a mini-masterpiece of gritty soul containing the deep soul cuts "Warm and Tender Love," "Shout Bamalama," and many dance tunes: "Cool Broadway," "Barefootin'," "The Bounce," and "Land of a Thousand Dances." Corley continued to sing in church while recording secular music. When he scored his first hit, he stated that his goal was to be the "number one soul brother," and, while he failed to achieve that lofty title, he did land among the stars for brief period courtesy of his explosive recordings.


I was able to find his album here: Boogaloo Down Broadway

Philadelphia’s Phil-L.A. of Soul might be best known for Cliff Nobles' "The Horse" which spawned a dance craze and plenty of copy-cat hits. (Check out this site where they really break down this whole Horse business!)  Aside from "The Horse", "Boogaloo Down Broadway" was Phil-L.A.'s biggest hit. I understand Phil-L.A. of Soul was a subsidiary of Jamie Records (started in Philly in 1957 by Harold Lipsius) and seems to have shuttered at some point in the 70s. If anyone has more info, please share!
And the clip! 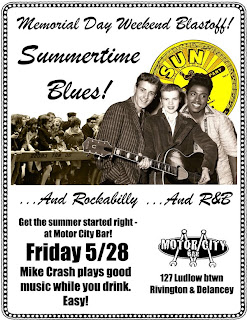 This Wednesday, the 26th, I'm DJing at Brooklyn Beauty Bar! 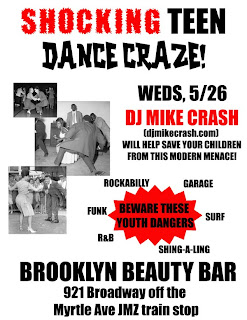 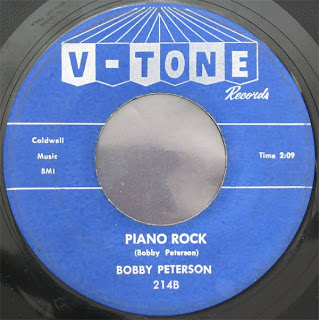 There's not too much info out there on Bobby Peterson, but here's what I could dig up courtesy of the folks at the Black Cat Rockabilly site:
Bobby Peterson was a pianist / vocalist from Chester, Pennsylvania, who started out imitating Ray Charles in smoky little bars on the outskirts of Philadelphia. Further musical apprenticeship was served as piano player for a vocal outfit known as the Apollos. In 1958 Bobby teamed up with sax player Joe Pyatt, who needed a singer and key- board player for his new combo and the Bobby Peterson Quintet was born. The other members were David Butler (drums), Chico Green (bass) and Jamo Thomas (congas and bongo). They made six remarkable singles for Buddy Caldwell's Philly-based V-Tone label between 1959 and 1961, before disbanding permanently in 1962. 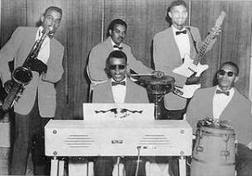 "Piano Rock" is a wild piano rocker instro which was paired with "Irresistible You". "Irresistible You" went to # 15 R&B and # 96 pop, and was later covered by Bobby Darin. Unfortunately, my record has a huge scratch on that side so I'm attempting some digital audio ninjary to whip it into playable condition.
Info on V-Tone Records is also scarce, this from Both Sides Now:
"One-time upholsterer Venton "Buddy" Caldwell started his own V-Tone label in 1958 in Philadelphia. The same year, he started Len Records as a subsidiary. V-Tone lasted until 1962 and Len until 1960. The company was located at 2034 Ridge Avenue in Philadelphia. When he discontinued V-Tone in late 1962, the last record was Fay Simmons' "It's a Sin to Tell a Lie"/"Where Is My Love" [V-Tone 237]. Caldwell then started the Palm label, and began with the exact same single, renumbered Palm 300, with the V-Tone master number scratched out and the Palm number written in on the dead wax. The Palm label only issued a handful of singles in 1963 before folding. "
I was able to find this compilation which has these two songs and the other big hits from the Bobby Peterson Quintet here: Irresistible You

And here's the clip!

This Wednesday at Trophy Bar! Bring out your dead! And your dancing shoes. 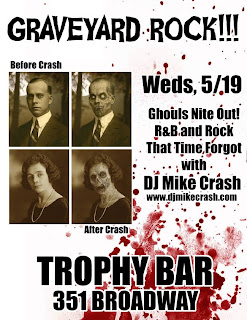 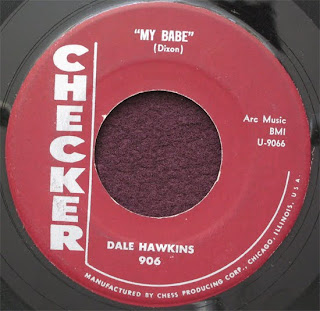 Today I've got some good 'ol Rockabilly for ya! Delmar Allen "Dale" Hawkins is best known for his song "Susie Q", which was a huge hit for Creedence Clearwater Revival in '68. Dale is also known as one of the architects of "swamp rock boogie", which is basically Rockabilly with a heaping handful of southern-fried Blues thrown in. 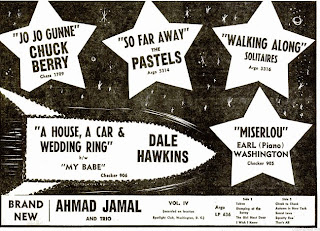 Mr. Hawkins was born in Gold Mine, Louisiana in 1936. What is it in the water in LA that makes such wonderful musicians? "My Babe" came out in '58, with Roy Buchanan on lead guitar duties for his recording debut (Roy went on to have a tremendous career and was later voted one of Rolling Stone's "100 Greatest Guitarists"). Interesting note: the original version of this tune was a blues number released by Little Walter and was heavily based on the gospel song "This Train (Is Bound For Glory)".

The original burst onto the charts at the same time Ray Charles was mining similar Gospel terrain with "I Got a Woman".
Here's the link to download the original version at Amazon: My Babe

This song was also covered by cats like Elvis Presley, Chuck Berry, Bo Diddley, etc, etc.
Checker Records is a subsidary of Chicago's legendary Chess Records, which was started by the Chess brothers in the late 40s. Volumes can, and have been, written about Chess Records. Let's just say they released some of the best Blues, RnB, Jazz and Early Rock out there. Maybe you even saw one of the movies! Chess Records was the subject of two films released in 2008, "Cadillac Records" and "Who Do You Love". In addition to the Chess brothers, both films feature portrayals of or based on Willie Dixon, Muddy Waters, Little Walter, Chuck Berry, and Etta James. Checker was started at a time when radio stations limited the number of releases from a particular label in thier playlists, so sublabels were a way to get around that (they also started a sublabel called Argo/Cadet). After years of releasing great matieral, things dried up in the late 60s and the label and catalog were sold (the first of many such sales for the label). I believe Universal now holds rights to the music.
You can download the Mp3 from Amazon for Dale's version here: My Babe

And now, the clip!

No comments:
Email ThisBlogThis!Share to TwitterShare to FacebookShare to Pinterest
Labels: rockabilly, vinyl

Tonight I'm at Cyn Lounge and tomorrow night at Blackout, both from 10 till late late. Bring on the weekend! 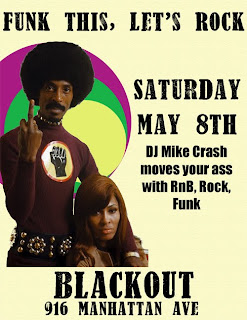 When putting together my last post, I realized the Google media player I was using to embed audio was broken and none of the music was working anymore. I just spent some time redoing all the embedded music on this blog using a new Google link - I hope this works for longer! Sorry about that.
No comments:
Email ThisBlogThis!Share to TwitterShare to FacebookShare to Pinterest
Afrique - Soul Makossa - Mainstream Records, 1972 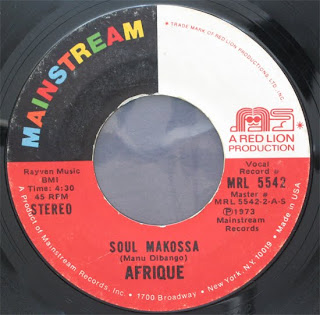 Afrique is best known for thier song "House of Rising Funk" which contains a great drum break sampled by the Geto Boys on 'Damn It Feels Good to Be A Gangster' and N.W.A.'s 'Appetite for Destruction'.
Here's a bit of info on the origin of "Soul Makossa" from the Bravo Juju blog:
"The first articles on "disco music" appeared in 1972, and the invention is credited to a Cameroon-born and Paris-based jazz saxophonist, Manu Dibango, who in that year released Soul Makossa (1972), an exciting mixture of funk-jazz saxophone lines and hypnotic African beats.
After it was issued, David Mancuso found a copy in a Brooklyn West Indian record store and often played it at his Loft parties. The response was so positive that the few copies of "Soul Makossa" in New York City were quickly bought up. The song was subsequently played heavily by Frankie Crocker, who DJed at WBLS, then New York's most popular Black radio station.Since the Dibango failed to register the copyright, 23 or more groups quickly released cover versions to capitalize on the demand for the record."
Afrique did one of those covers, which is what we have here today. What can I say, this jam is basically a guareenteed ass-shaker, super funky Afro grooves! I'm listening to it right now and pumping my fist in my bedroom, seriously. You can still find the album without much trouble, here's the Amazon link: Afrique

From Wikipedia: Mainstream Records was founded in 1964 by Bob Shad, and in its early history reissued material from Commodore Records and Time Records in addition to some new jazz material. The label released Big Brother & the Holding Company's first material in 1967, as well as The Amboy Dukes' first albums, whose guitarist, Ted Nugent, would become a successful solo artist in the 1970s. Mainstream acted as the distributing label for the subsidiary Flying Dutchman Records and continued issuing soundtracks and new jazz material through 1978, when it shuttered.
Now let's do this clip!