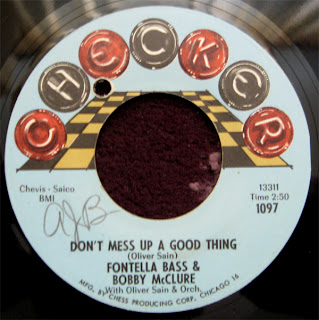 This is one of my favorite records! Of course, I play the hell out of it.
Fontella Bass (born July 3, 1940, St. Louis, Missouri) is best known for her hit "Rescue Me", which was released the same year.  She was already singing in front of crowds at church by the time she was 5 or 6. (Personal secret: I sang in church as a kid. Apparently, even shitty singers get a break sometimes!) A few years later, she was touring and singing with her mother throughout the South. 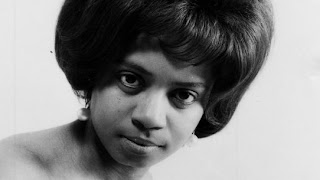 In the early Sixties she recorded a few tunes for the Bobbin label which were produced by Ike Turner, but they didn't get much play outside of St. Louis. A few years later she moved to Chicago and hooked with Chess Records, and the hits came fast and furious.
Bobby McClure was born in Chicago but raised in St. Louis. Similarly, he got his start singing in church and took it from there. He did some work in St. Louis with Fontella Bass as the "The Oliver Sain Soul Revue featuring Fontella and Bobby McClure". 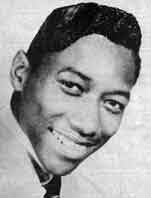 After a split with Sain, McClure and Bass released a few duets on Checker - I believe this was the first and it did quite well, reaching top five at R&B radio and peaking at #33 at pop. Later that year she returned to the studio for "Rescue Me". From Wikipedia: "The song "Rescue Me" shot up the charts in the fall and winter of 1965. After a month-long run at the top of the R&B charts, the song reached #4 at the pop charts and gave Chess its first million-selling single since Chuck Berry a decade earlier. It sold over one million copies, and was awarded a gold disc."
Checker Records was born in 1952 and was an offshoot of giant Chess Records out of Chicago, a label that comes here up often and will much more.
And now, the clip!

Halloween Weekend Part 3: Niagara on 10/31! Don't give me any of your lame ass "I gotta work tomorrow" excuses. THIS IS HALLOWEEN. 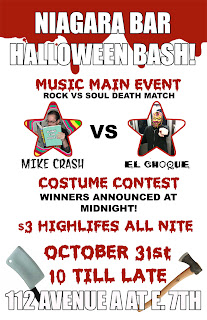 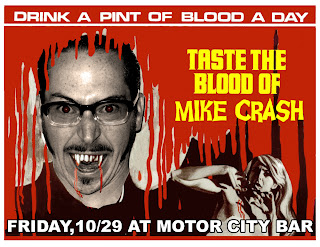 Time again for my monthly at Huckleberry Bar! Thursday 10/28, be there or be square! 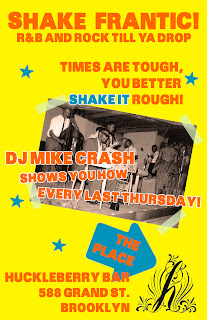 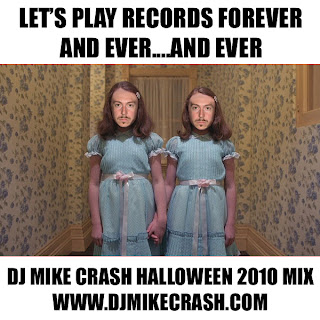 Halloween 2010 Mix by djmikecrash
No comments:
Email ThisBlogThis!Share to TwitterShare to FacebookShare to Pinterest
Labels: djmix 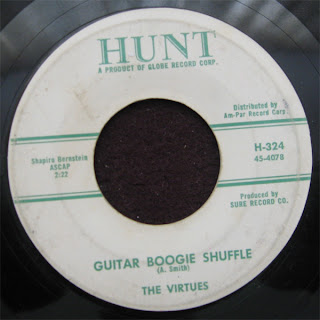 Today we've got a great slab of early instro rock from Philadelphia's the Virtues!
Frank Virtue put this band together in 1947 after being discharged from the Navy in '46 to look after his family. Starting a band was the natural thing to do after his stint as bandleader of the Regular Navy Dance Band while enlisted. 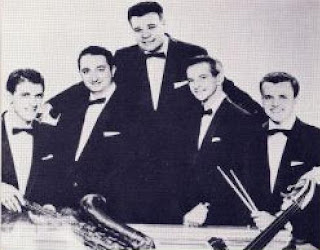 Ralph Frederico on the piano and Steve Rossi on the guitar filled out the trio. After touring for the better part of a decade doing smaller gigs, the boys decided to try to get a piece of that Rock N' Roll craze in the late 50's. Here's the low-down from Wikipedia:
"By this time, the group's lineup had expanded, with Virtue on the bass, John Renner on the saxophone, Jimmy Bruno on the guitar, Joe Vespe on the drums, and Dave Kaplin as an occasional vocalist. Under the name The Virtues, they released a rock reworking of Arthur "Guitar Boogie" Smith's country hit "Guitar Boogie" in 1958 under the title "Guitar Boogie Shuffle". The instrumental became a major hit in the U.S., peaking at #27 on the Black Singles chart and #5 on the Billboard Hot 100 in 1959. The single also became a sheet music smash, selling well worldwide. Several singles followed – "Flippin", "Boogie Woogie", "Vaya con Dios" – but none of them succeeded; the group was signed by ABC/Paramount, but their only return to the charts was with the 1962 release "Guitar Boogie Shuffle Twist" (U.S. #95). 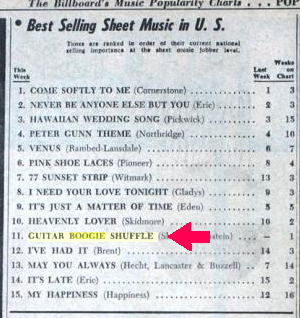 Towards the end of 1962, Virtue disbanded the group and pursued a career as a record producer and recording engineer. His studio, Virtue Recording Studios, located at 1618 N. Broad St., was one of the top studios in Philadelphia for a number of years until closing in the early 1980s. His original studio, in the basement of his house on Fayette Street, was where "Guitar Boogie Shuffle" was originally recorded." 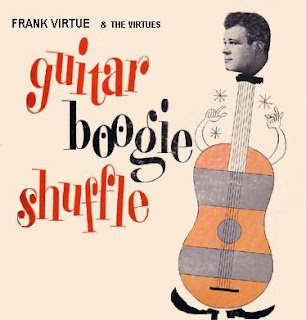 If you'd like to read more about the Virtues, I'd recommend this page: http://www.allmusic.com/artist/the-virtues-p24947/biography
Note, I believe Virtues studios is where some of my favorite music was recorded for the Phil-L.A. of Soul label - "The Horse" and "Boogaloo Down Broadway" (covered here!)
Hunt seems to have been owned by Globe Record Corp and dispributed via Am-Par Records. Perhaps they were Philly based? I can find no other info on this label - please share if ya have some.
And now, the clip:

Sunday the 17th at Niagara!

Come out and play with me! 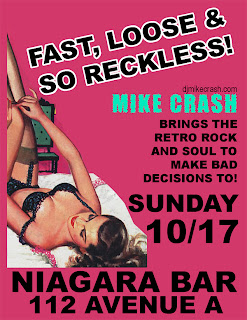 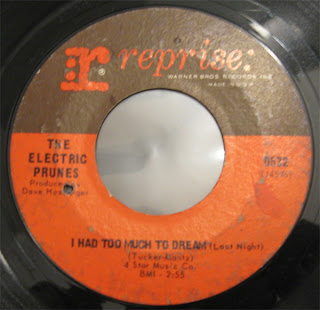 Today I've got something a little different and..psychedelic - The Electric Prunes! Is this band's name aweful or awesome? Too close to call really, although rumor is that it was jokingly suggested as a last minute name idea for their first release "Ain't It Hard"/"Little Olive".  That single flopped. 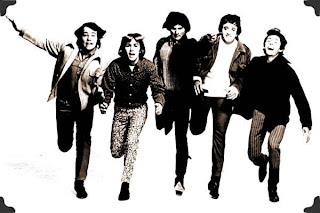 But the next one, today's 45 "I Had Too Much To Dream (Last Night)" was a hit! It remains their highest charting success, reaching 11 in the USA and 49 in the UK.  This tune wasn't penned by the group, but rather the songwriting team of Annette Tucker and lyricist Nancie Mantz.  Apparently the band's producer,  Dave Hassinger, thought they needed some help in the songwriting department and made the connection. The signature reversed guitar lick which opens the songs appears to have been a happy accident of the recording process.  Here's a qoute from singer James Lowe:
"We were recording on a four-track, and just flipping the tape over and re-recording when we got to the end. Dave cued up a tape and didn't hit 'record,' and the playback in the studio was way up: ear-shattering vibrating jet guitar. Ken had been shaking his Bigsby wiggle stick with some fuzztone and tremolo at the end of the tape. Forward it was cool. Backward it was amazing. I ran into the control room and said, 'What was that?' They didn't have the monitors on so they hadn't heard it. I made Dave cut it off and save it for later."
This record was a slow starter when released, but it gradually picked up steam and became the hit that really started the bands career.  "Too Much To Dream" was later covered by Stiv Bators, The Damned, Doro Pesch, Paul Roland and others.
This song was included in the classic "Nuggets" compliation in 1972, allowing it to reach many new fans.  The Nuggets album is just a tremendous collection of mid to late 60's Rock, and you MUST pick it up.  Over the years it's been expanded into a several CD set I believe. Oddly, I was exploring 60's Rock and I found the Nuggets compliation late - after I had already purchased most of the songs individually. At any rate, when I realized this comp existed I just had to have a copy - here's a pic of my copy of the early 70s vinyl release. 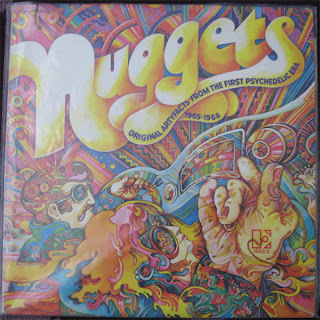 The Electric Prunes actually got back together in around 2000, and in 2002 released a new recording titled "Artifact". They're still touring, and I hear they are working on some new material with Billy Corgan of Smashing Pumpkins.
And finally, the clip!

No comments:
Email ThisBlogThis!Share to TwitterShare to FacebookShare to Pinterest
Labels: psych, vinyl

Time for another Rockin' good time at Trophy Bar! October the 13th! Let's get ghoulish. 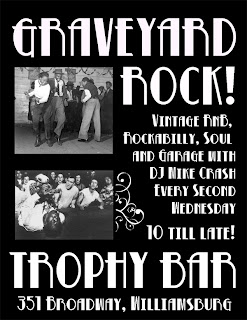 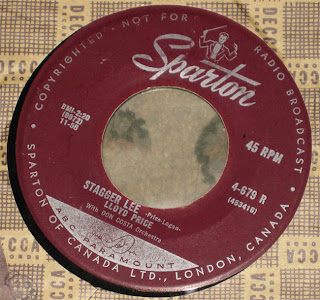 Lloyd "Mr. Personality" Price is a New Orleans native and RnB legend. Now age 77, Lloyd is still kicking around doing his thing - go Lloyd!
His first big hit was "Lawdy Miss Clawdy" for Specialty in '52.  But after that huge record, Lloyd didn't have any hits till the late 50's. A short stint in Korea for the war didn't help. 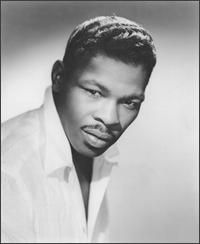 When LLoyd was back in the States he put together KRC Records with Harold Logan and Bill Boskent, and they put out a strings of hits via ABC records, today's "Stagger Lee" included. "Stagger Lee" is a great tune with a long history. From Wikipedia:
"Stagger Lee", also known as "Stagolee", "Stackerlee", "Stack O'Lee", "Stack-a-Lee" and several other variants, is a popular blues folk song based on the murder of William "Billy" Lyons by Stagger Lee Shelton. 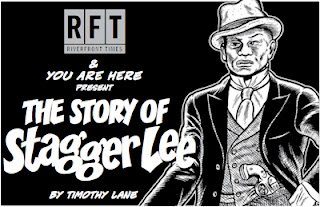 The version recorded by Mississippi John Hurt in 1928 is considered by some commentators to be definitive, containing as it does all of the elements that appear in other versions.
Peep this article for more info on that murdering pimp who later inspired so many musicians: http://en.wikipedia.org/wiki/Stagger_Lee_Shelton (spoiler: the fatal fight may have been started by an argument over..politics?)
Elton John, Nick Cave, The Clash, and The Black Keys are just several folks who were influced by the original tale. 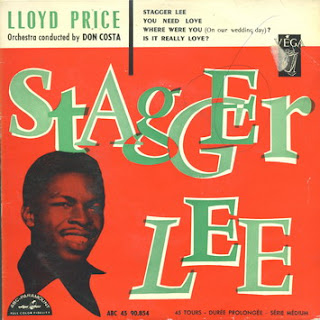 On March 9, 2010, his 77th Birthday, in New Orleans, Lloyd Price was inducted into The Louisiana Music Hall of Fame and on June 20, 2010, Price appeared and sang in season 1 finale of the HBO series "Treme". (After some strong initial reservations, I finally watched this show and think it's...pretty good.)
Sparton Records was a Canadian record label based out of London, Ontario. Rather oddly, it was formed by a radio manufacturing company called Sparks-Withington Corp from Michigan. I can imagine a boardroom meeting where someone excitedly shouts out "I GOT IT! We'll make the radios... AND THE RECORDS!" Spartan was manufactured and distributed by Columbia, and they had some other distribution deals with various labels. I believe this particular song came out on NYC's ABC Records originially, so I'm assuming ABC and Sparton had some sort of distribution deal going. Sparton folded in the 60s.