Today I've got a groovy late 60s instro fuzz blaster for ya! I'd compare it to something from Davie Allan and the Arrows (if you don't know them - they are the kings of 60's fuzz rock instros, and you should get to know them!) 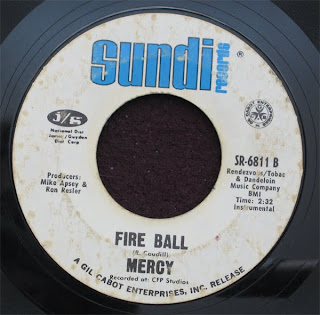 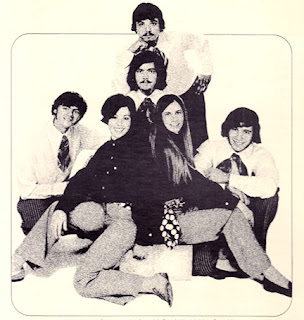 Mercy is ready for their close-up
Singer Jack Sigler's father managed to hook up the group with a movie producer in town to film crash-and-burn flick Fireball Jungle.

Scene from "Fireball Jungle"
Mercy performed two songs for the film, which are the two songs on this 45 - "Love (Can Make You Happy)" and "Fireball". "Love" ended up being a hit, but unfortunatly, by the time this song was a hit Jack Sigler had joined the military and the band was falling apart. So there was scrambling to put together a touring group and other assorted nonsense.
Sundi Records was owned by Gil Cabot (Gilbert A. Cabot, who was also responsible for the Paris Tower label), and was based in Tampa, Florida, until about 1971, when Cabot moved the company to Hollywood, California. 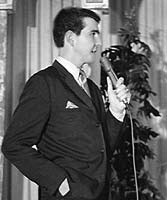 Mr. Cabot himself
The label seems to have been active between 1967 and 1972. For a super detailed look at the history of Sundi Records, check out the BSNPubs site here. It turns out "Love" was the only hit the label ever had, and it was responsible for a distribution deal with Jamie/Guyden, a copy-cat group from Warner Brothers, and plenty of legal troubles not resolved until the 90s. All of the juicy details are available on the aforementioned site.
"Love (Can Make You Happy)" is pretty easy to find on "One Hit Wonder" kinda comps, but the flip side seems to have been forgotten for some reason, which is a damn shame. Listen to this clip and decide for yourself:

Back at Motor City Bar

Saturday the 31st I'll be at Motor City Bar! Come on down for a good time, kicks off at 10PM. 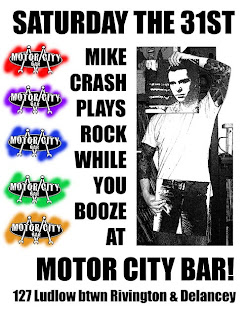 This month's mix is now up on Soundcloud for listening and download! Check it out by clicking here . 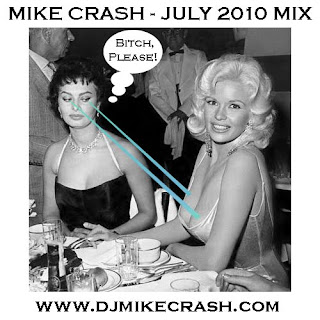 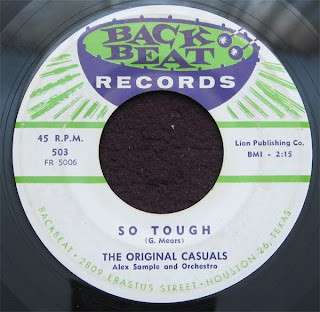 "So Tough" was first recorded by The Casuals for Back Beat Records in 1957.  Love this label design! It shouts, "Let's bang on the drums and dance like wild men!" You'll note that this 45 indicates the artist as "The Original Casuals" - apparently "The Casuals" wasn't a very original name so later versions of this record were billed as "The Original Casuals" to avoid legal issues. Here's a blurb (from here) I found about Back Beat Records:
In August 1957, Don Robey, president of the Houston-based Duke-Peacock labels (One to the few successful Afro-American businessmen in a Caucasian dominated industry), announced the formation of a new label, Back Beat, aimed at the burgeoning Rock'n'Roll market, Duke and Peacock being primarily gospel and R&B outlets. "The artists appearing under our new label are in most instances teenagers in actual age count or at heart". explained Robey punctiliously, "and as such, our new baby Back Beat is dedicated to the teenage market." 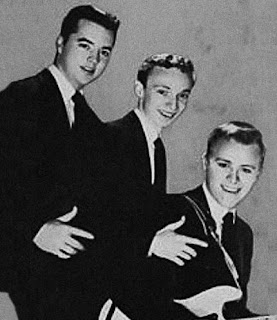 What better way to get the teen market than to release teen artists? You'll notice The Casuals are certainly quite young in this promo picture. Here I was hanging out and causing trouble and these kids were making hits! All I know about The Casuals is that they were from Dallas and this tune broke the national top 50 Pop charts. Surprisingly, I see a couple of copies of this record for sale on Amazon here: So Tough b/w I Love My Darling 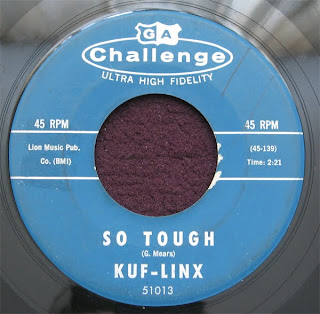 And no we move on to version number two, from the Kuf-Linx on Challenge records. This one was also released in 1957, just months after the original. Like The Casuals version, this one did well but seems to have been more of a West Coast regional hit. Unlike The Casuals, Kuf-linx was comprised of seasoned black musicians who brought a very different vocal style to the song. 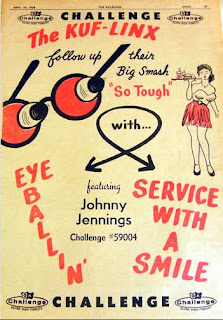 Here's a little info on Kuf-Linx pulled from this very comprehensive page:
The Kuf-Linx consisted of John Jennings (lead tenor), Johnny Woodson (tenor), Gaines Steele (tenor), George (Biggie) McFadden (bass), Leo Z. Manley, Darrell Johnson, and Gwen Johnson. Jennings and McFadden had been in the Jubalaires in the mid-40s. L.Z. Manley was a well-known gospel lead singer, who had been with the Heavenly Gospel Singers and the Stars Of Harmony. Gaines Steele, younger brother of gospel great Silas Steele, sang with Detroit-area gospel groups and a West Coast Ink Spots group (with Clifford Givens); in the mid-60s, he was a member of the 4 Tunes. Gwen Johnson was a Los Angeles session backup singer singer. This basic group consisting of a whopping seven members, likely recording as John Woodson and the Crescendos on the Spry label.
Challenge Records, founded in '57 out of L.A., was briefly mentioned in my last post regarding "The Originals". They had quite a run before going under in the 60's!
A now for the two clips! Which do you prefer?
The Casuals version:

Next up is Huckleberry Bar (http://www.huckleberrybar.com/) on the 22nd! Good food and drinks + music from me = let's start the weekend Thursday night! 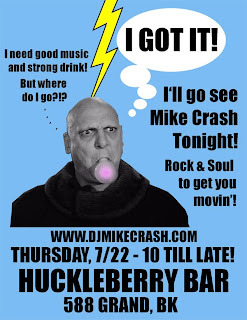 Tonight, and every First Friday of the month - come hang out at Cyn Lounge for good booze, good tunes, and NO BULLSHIT! 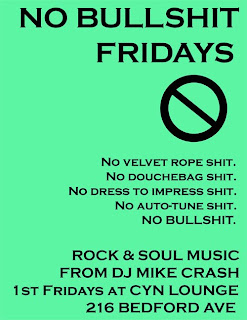 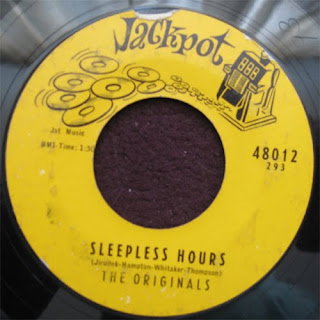 I guess I'd call this R&B, but this is one sleazy piece of wax! This song would be right at home in a 50's era Vegas strip-club.  The crowd hoots and hollers while the ladies shake it dangerously!
I'm having a heck of a time finding info on The Originals. BUT - I'd like to note, "Awesome name!" I can't help but think of that bit in the Spinal Tap movie:

Nigel Tufnel: "And then, we looked at each other and said..."
David St. Hubbins (Michael McKean): "Said, look, why not?"
Nigel: "...we might as well join up. You know?"
David: "So, we became the Originals."
Nigel: "Right."
David: "And, uh, we had to change our name, actually."
Nigel: "Well, there was another group, in the east end, called the Originals and we had to rename ourselves."
David: "the New Originals."
Nigel: "the New Originals."
David: "Yeah."
Nigel: "And they became..."
David: "...the Regulars. They changed their name back to the Regulars. And we thought we could go back to the Originals, but what's the point?"
But I digress..
The only info I could find on The Originals was that they did a release, also on Jackpot/Challenge, with the legendary Danny Flores AKA Chuck Rio. 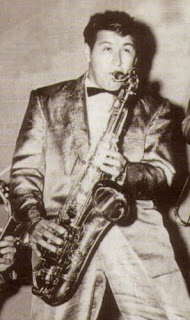 Danny Flores was known for his hit "Tequila" - which he wrote and performed sax on (which was famously used in one of the best scenes in "Pee Wee's Big Adventure"). Later Danny and The Originals put out a tune called "Margarita" which is in the vein of "Tequila" but dare I say - superior! If you see it, grab it! There's a good chance Mr. Flores did the sax on today's tune, but I can't be certain. 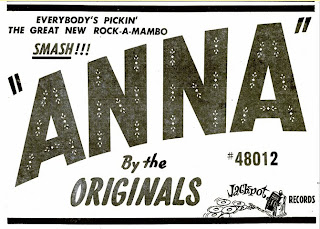 The info I have on Jackpot is from the fine folks at Color Radio:
Jackpot records was a Hollywood based label, with offices out of 6920 Sunset Boulevard. It had a fairly short life span, turning out 21 records in about a year and a half. And what a variety those 21 records turned out to be! Instrumentals, vocal groups, pop, and country. They were also a subsidiary of the Challenge label located on La Brea Avenue in Hollywood. Owners of the label included Joe Johnson, Johnny Thompson, Bernie Solomon, and most famously, Gene Autry - The Singing Cowboy himself! He was the main shareholder and certainly an executive with high visibility. He was part of JAT music publishing which you see listed on many of the Jackpot sides, that included Johnson,Autry and Thompson. He recorded several sides for Challenge, but none for Jackpot. His interest in the label lasted only five months, and he was bought out by the other partners.
And now, the clip! Feel the sleaze oozing from your speakers!

For a limited time, my "Big Adventure" mix from last year is available for download. Garage, Rockabilly, Surf and Pee Wee Herman! Get it here: DJ Mike Crash's Big Adventure 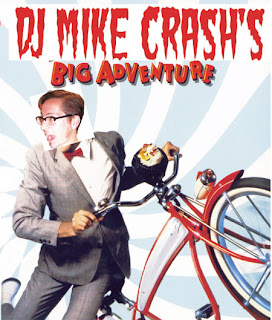 No comments:
Email ThisBlogThis!Share to TwitterShare to FacebookShare to Pinterest
Labels: djmix
This Wednesday is my monthly at Trophy Bar . Come out and have a good time! 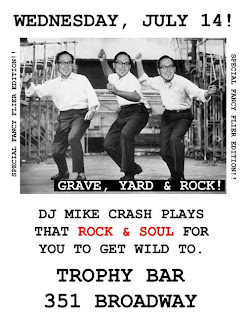 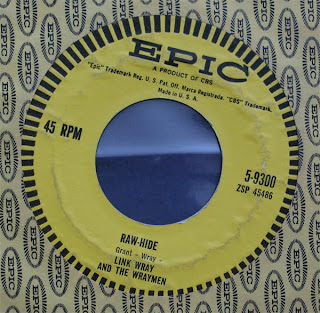 I've been neglecting Rock in favor of R&B lately, so what better way to get back to Rock than with Link Wray. To say Link Wray is a legend is an understatement. The guy practically invented the distorted electric guitar sound and the power chord, thereby making punk and heavy rock possible. (note: OK, that's a bit of hyperbole - but he did popularize distortion and was one of the first to make power chords a central part of a song's composition.) He was scaring the shit out of parents in the 50's with nothing more than his menacing sounding guitar! Link Wray's first big hit, "Rumble", was actually banned from many radio stations for "glorifying teenage delinquency". Pete Townshend stated in unpublished liner notes for the 1970 comeback album, "(Link Wray) is the king; if it hadn't been for Link Wray and 'Rumble,' I would have never picked up a guitar." In other liner notes in 1974, Townshend said, of "Rumble": "I remember being made very uneasy the first time I heard it, and yet excited by the savage guitar sounds."

Jeff Beck, Duff McKagan, Jimmy Page, Jimi Hendrix, Marc Bolan, Neil Young and Bob Dylan have all cited Wray as an influence.
How is Link Wray not a member of the Rock N' Roll Hall of Fame yet? Is there no justice in this world?!?!
Today's song, "Rawhide", was the follow-up to "Rumble". It's a straight-forward blaster that wastes no time getting to frantic pace and staying there. Put this song in the jukebox and I guareentee the joint will explode.


"Rawhide" can be had be downloaded from Amazon for .99, but I'd also recommend checking out the rest of the album "Whistle Bait", a wonderful introduction to 50's Rockabilly.
The Epic record label was founded in 1953 and is still thriving today, owned by Sony Music Entertainment and operating under the umbrella of the Columbia/Epic Label Group. Here's the Wikipedia blurb:
Epic Records was launched in 1953 by CBS for the purpose of marketing jazz and classical music that did not fit the theme of the more mainstream Columbia Records. Its bright-yellow, black and blue logo became a familiar trademark for many jazz and classical releases.  By 1960, the label's musical base had been expanded to include all genres. This was done in part to prevent the roster of Columbia Records (which, at the time, had a reputation for releasing material by more established acts) from being overstuffed with newer artists. Subsequently, Epic became better known for its signing of newer, fledgling acts. By the end of the 1960s, Epic earned its first gold records and had evolved into a formidable hit-making force in rock and roll, R&B and country music. Among its many acts, it included Roy Hamilton, Bobby Vinton, The Dave Clark Five, The Hollies, Tammy Wynette, Donovan, The Yardbirds, Lulu, July and Jeff Beck.
Perhaps the YouTube video makes this redundant, but here's a better quality audio clip recorded from my 45: