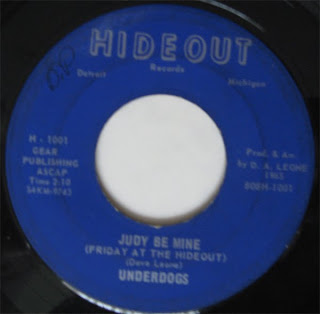 The week I've got a Midwest Garage burner from The Underdogs! So let's talk mid-60's Michigan for a minute.
Harper Woods is a city on the outskits of the east side of Detroit. Incorprated in the Fall of 1951, Haper Woods ended up become a suburban oasis of music, mostly due to a small club called The Hideout.
Opened in May of 1964 by Dave Leone and Ed Andrews in a VFW hall, The Hideout quickly became a hit with the local teens. Says Dave Leone: "It was the first teen club in the state of Michigan that featured live music. Up until that time there had been teen dances with recording artists, mainly black, lip-syncing to records".
Adding a record label to the club enterprise, the first release was a limited run LP featuring local house band The Fugitives. One song on it, "Friday at The Hideout" was penned by Leone. When members of The Fugitives split for college, The Underdogs took over as the house band at The Hideout. The Underdog's performance of "Friday at The Hideout" ended up being the first proper release on the fledgling label.
My info on the Underdogs is pretty sparse. I know the members included Tony Roumell and Chris Lena on guitars, Mike Morgan on drums, and ???? on vox???. I belive this single was recorded at Underground Sound Studios. This particular single was also issued on Reprise once a national distribution deal was worked out. If you see a copy of The Underdog's "Get Down On Your Knees", definitely do yourself a favor and pick up this classic cut, my favorite from the band.
Guys like Bob Seger, Mitch Ryder, Ted Nugent, Glenn Frey and MC5 were involved with the club and/or label over the years.  For an introduction to Hideout Records and plenty of info on the scene, check out the compilation "Friday at The Hideout" on Norton.
And now, the clip! 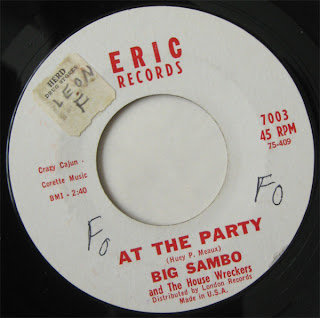 This is a great Little Richard-style stomper of a party tune.  Details however, are sketchy - speak up if you know something!
Big Sambo & The House Wreckers were from Beaumont, Texas, led by sax honker James Young.

"The Rains Came", on the flip, is the more well-known song from this single. You'll note the record indicates Huey Meaux aka "The Crazy Cajun" was involved.  Huey is a DJ/Publisher/Label Owner who made his mark in Texas after moving at a young age from his hometowm near Kaplan, Louisiana. He was involved with artists like Barbara Lynn, Joe Barry and Rod Bernard and T. K. Hulin. Huey's probably best known for his Friday night radio program on KPFT-FM in Houston. 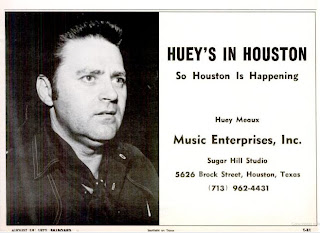 Back to Mr Young - it seems the single's rise to fame was interrupted by some angry folks at the NAACP who demanded Young lose the "Big Sambo" moniker. Also interesting, the Sir Douglas Quintet covered the flip and had a hit with it in'66.
From what I can gather, Eric Records was a subsidiary of Tear Drop Records, which Heuy Meaux started sometime around 1960.  If the dates are right, that makes this record an early release for the label.
And of course, the clip:

Hey folks, here's the Christmas mix I put together last year.  Hope ya enjoy and have a wonderful holiday! 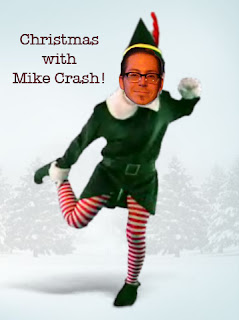 Christmas with DJ Mike Crash by djmikecrash
No comments:
Email ThisBlogThis!Share to TwitterShare to FacebookShare to Pinterest
Labels: christmas, djmix 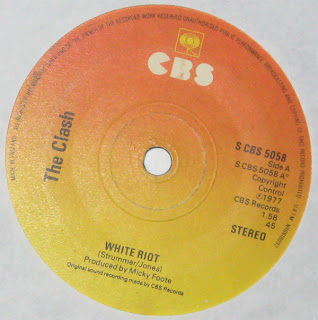 I thought I'd mix it up this week with a Punk 45. And I was actually alive when this record came out, so that's different (yes, I was the ripe old age of 1).
"White Riot" was The Clash's first single after signing their first big record deal, with CBS.  The contract was signed on January 27th, and The Clash reported to the studio the next day to churn out the first single.  The sessions took place in CBS's studio on Whitfield Street, with Mickey Foote on as producer. (interesting tidbit: the Stooges recorded "Raw Power" at the same studio in '73).

"White Riot" was a tune inspired by the '76 Notting Hll Carnival Riots, which members of The Clash accidently found themselves caught in.  Simmering racial tensions, exacerbated by the National Fronts' increased public presence, got disaffected black youth rioting that day - so how did The Clash get "White Riot" out of that?
From Kris Needs' great book "Joe Strummer and the legend of The Clash":

"Being inspired to write a song called "White Riot" in response to the Carnival incident can never be considered one of the band's blunders. They were simply calling for white people to show a similar passion for change and action as the black youths at Notting Hill. Not neccesarily by throwing bricks at coppers, but simply getting off their arses and not being content with their drab lot in life."


The song wasn't a big charter in the States and only reached #38 in the UK, but it did spend a total 33 weeks on the UK charts.
The Clash of course went on to become Punk legends.  If you don't enjoy The Clash, then I'm sorry, but we can't be friends.
CBS Records released the non-US versions of US-based Columbia Records, to avoid confusion with EMI's Columbia Records. It was founded in 1888, evolving from an earlier enterprise, the American Graphophone Company — successor to the Volta Graphophone Company. Columbia is the oldest surviving brand name in pre-recorded sound, being the first record company to produce pre-recorded records as opposed to blank cylinders. Columbia is now owned by Sony.
And of course, the clip!

No comments:
Email ThisBlogThis!Share to TwitterShare to FacebookShare to Pinterest
Labels: punk, vinyl 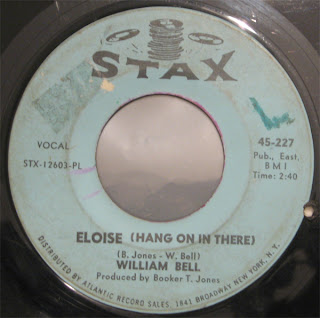 The other day I was running through some 45s and I realized there were a few I never got around to ripping to digital so I could play them out.  I've been really missing out by not having this monster in my bag! Great, great tune.
Bell was born in Memphis, Tennessee. He took the last name "Bell" as a stage name in honor of his grandmother, whose first name was Belle. After a start with The Del-Rios in the 50s, he began releasing records on Stax in the early 60's with "You Don't Miss Your Water".
"Share What You Got (But Keep What You Need)" was his first big hit in '66. His later hits were covered by artists such as Cream, Billy Idol, and Albert King. 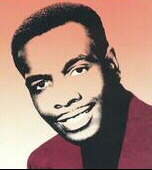 This particular tune seems to be a bit under-the-radar, I don't believe it had any real chart success. As you can see by the label, this was another collaboration with Booker T. Jones.  Kind of a shame this one didn't break out as it's a real corker!
Stax Records is an epic record label, defining the Memphis Soul sound. Otis Redding, Booker T & The MGs, Rufus Thomas, The Bar-Kays - just a handful of the tremendous artists that released on Stax.

From Wikipedia: "Stax Records, originally named Satellite Records, was founded in Memphis in 1957 by Jim Stewart, initially operating in a garage. Satellite's early releases were country music records or straight pop numbers, reflecting the tastes of Stewart (a white country fiddle player) at the time." 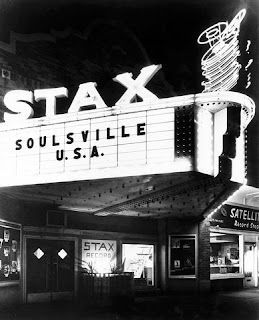 Out of Satellite Records came Stax Records (a portmanteau of the names of the two owners of the company: Jim Stewart and Estelle Axton) and Volt. In the early/mid 60s they rose from regional to national labels alongside Motown. By the late 60's Stax started to falter after legal troubles with distributor Atlantic and the death of Otis Redding. Stax/Volt Records was forced into involuntary Chapter 11 bankruptcy on December 19, 1975.
If you see a Stax 45, just give it a listen! And now, the clip:
No comments:
Email ThisBlogThis!Share to TwitterShare to FacebookShare to Pinterest
Labels: Memphis, soul, vinyl

Please come out for my last Graveyard Rock party at Trophy Bar. It's been fun, I need to give up this gig to focus on a new j-o-b. Wednesday the 8th! 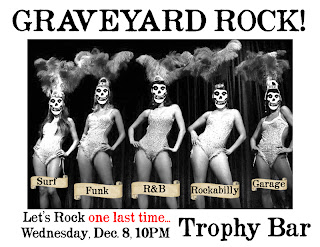