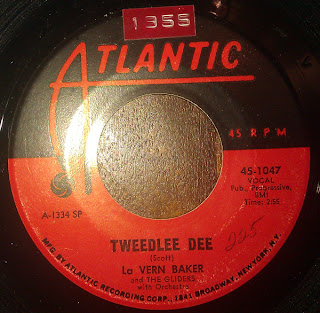 Lavern Baker had music in her blood, being related to both Memphis Minnie and Merline Johnson. A Chicago native, she was born there in 1929. By the mid-40s she was performing around town as "Little Miss Sharecropper".  After signing to Atlantic in '53, this was her second release and first big hit - it went to #4 on the R&B chart and #14 on the national US pop charts. "Tweedlee Dee" was an even bigger hit for Georgia Gibbs (a bit of a sore subject for LaVern, she sued unsuccessfully).


LaVern's other big hit was "Jim Dandy", a tune probably familiar to most of you.
From Wikipedia:
"She received the 1990 Pioneer Award from the Rhythm and Blues Foundation. In 1991, Baker became the second female solo artist inducted into the Rock and Roll Hall of Fame, following Aretha Franklin in 1987. Her song "Jim Dandy" was named one of The Rock and Roll Hall of Fame's 500 Songs that Shaped Rock and Roll and was ranked #343 on the Rolling Stone's 500 Greatest Songs of All Time."
LaVern Baker passed away in 1997, and was buried in Maple Grove Cemetery, Queens, NY.

Irene On My Mind

Yesterday I had a bad case of hurricane on the brain as Hurricane Irene made her way up the coast to NYC. Luckily, we didn't get hit too bad. But it did bang out this song while I waited for the skies to clear and head back to my local pub. Less than two minutes of surfy silliness. 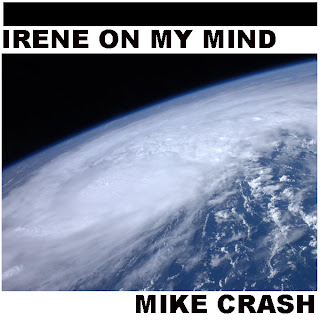 Irene On My Mind by djmikecrash

No comments:
Email ThisBlogThis!Share to TwitterShare to FacebookShare to Pinterest
Labels: originalmusic

This Thursday the 25th will be the last Shake Frantic at Huckleberry Bar.  It's been fun year, but the DJ booth is getting yanked out and the parties killed along with it.  Help me drown my sorrows in delicious booze and music.  588 Grand and Lorimer, 10PM sharp. Be there or be L7. 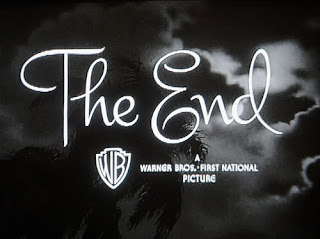 Mix for August is up!

New set is up so get at it. This month, a little something different - old school bass, island style! Rocksteady now, rudeboy. 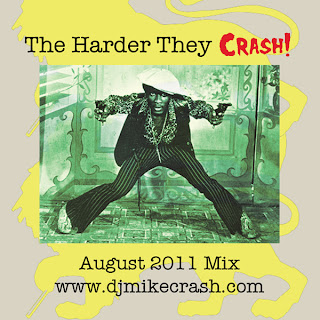 The Harder They Crash by djmikecrash 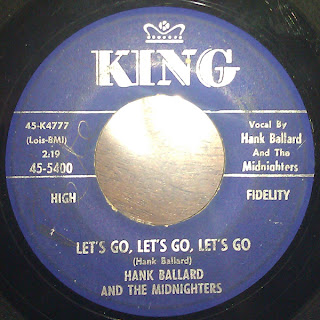 I play this one all the time, a great, great tune that just puts a smile on my face. 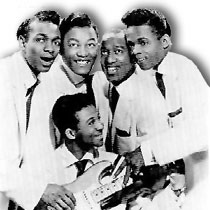 Hank Ballard is a GIANT, I tell you.  Maybe you've heard this song before.  Or that scorcher "Work With Me Annie". Or maybe you've heard that little tune called "The Twist", which was in no small part responsible for the 60's dance craze scene.  In the mid-50's, Hank Ballard had a big hand in creating Rock and Roll.
Hank was a Detroit, Michigan native; performing young in church and enjoying the sounds of singing cowboy Gene Autry. In '53, he joined up with The Royals,  but they had to change their name to avoid confusion with The Five Royales.  Their first big hit was in '54, "Work With Me Annie" - a huge tune with a not so subtle sexual message.
"Work with me Annie,
Let's get it while the gettin' is good!
(So Good! So Good! So Good!)"
"Annie" led to a number of answer songs like "Annie Had a Baby" and "Annie's Aunt Fannie". In '54, they released respectable ballad "Tearsdrops On Your Letter", but the B-side was a monster that was a number 1 hit for Chubby Checker (twice!), "The Twist".
From Wikipedia: "Ballard & the Midnighters had several other hit singles through 1961, including the Grammy-nominated "Finger Poppin' Time" and "Let's Go, Let's Go, Let's Go" which hit number 7 and number 6, respectively, on the Billboard pop charts."
The band split in '65, never again reaching those early peaks. Hank Ballard did release a few more singles and a James Brown produced album.  He passed away in 2003.
Based out of Cincinnati, Ohio, King Records put out too many brilliant records to name.  Syd Nathan started the label in '43, originally focusing on country or "hillbilly" music.  But RnB really picked up at King and sister label Federal starting in the 50's.  We're talking guys like James Brown, Bill Doggett, Charlie Feathers, Wynonie Harris, Joe Tex, etc, etc. I've been seeing Federal repros about; so do yourself a favor and buy some! 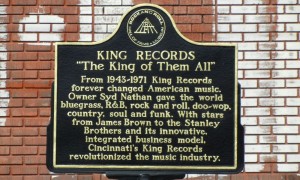 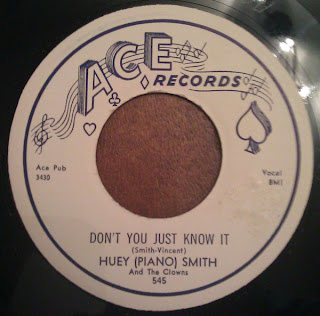 It's time for a return to New Orleans, with a classic cut from RnB legend Huey "Piano" Smith.

Huey was making music from an early age; it's rumored he composed and performed his first tune at the age of 8! By the time he was 15 he was playing clubs, and by the time he was 18 he had signed to Savoy Records.  Huey came up as a sideman to some of the biggest names in the business, guys like Little Richard, Lloyd Price, and Earl King. But in '57 he formed The Clowns and began releasing tunes at Ace Records. They hit it big with "Rockin' Pneumonia and the Boogie Woogie Flu", an absolute essential New Orleans tune. Today's single, released in '58, is their most well known hit, making it all the way to #4 on the RnB charts. You may also be familiar with Frankie Ford's "Sea Cruise" - a number that Smith composed and originally performed, which took that charts by storm when smooth white crooner Ford did his take.

After the late 50's, Huey was never able to regain that early fame. At some point later, he became a Jehovah's Witness and dropped out of the music scene entirely. But his piano playing, and its influence on Rock and Roll, won't be forgotten.

Ace Records was run by Johnny Vincent. After his start at Specialty as an A&R man and producer, he opened Ace around '54 - '55. Ace had a few great hits, biggest among them the Smith and Ford tunes mentioned above, but by the early 60's things began to slow down and in '62 the label was shuttered. Johnny Vincent passed away in 2000 of heart failure, he was 74. 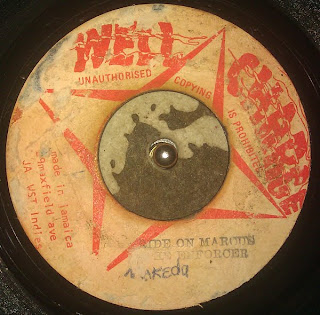 The magnetism of Reggae cannot be denied. Wonderful music, rare records, tons of sub-genres, and a tight community with its own unique culture. This may very well translate into many dollars missing from my wallet and new records on my shelves.
Today's record is a great tune from the mid-late 70's, which I'm hearing is considered by many to be the golden age of that music.  As you'll hear, this particular record is well thrashed, and the label picture above is a good indication of what the actual vinyl looks like.
All I know about the Enforcer is they put out some other wicked tunes in the 70's, like "Pay Them". The Well Charge label put out quite a few releases judging by the partial discographies I've seen, but I have no real info on them.
So sit back, relax, and enjoy a minute of this reggae enigma: 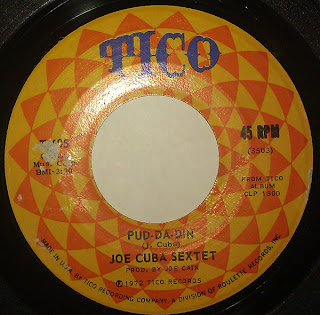 This week I'm showing a bit of my Puerto Rican side, with a hot number from Joe Cuba.
Joe Cuba is known as the "Father of Latin Boogaloo", the style that rocked New York in the mid to late 60's with it's original combination of R&B, rock and roll and soul with mambo and son montuno. 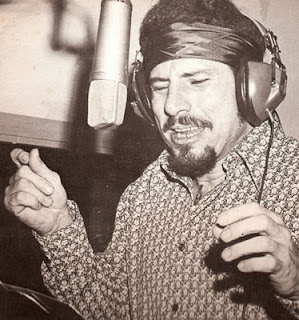 Born "Gilberto Miguel Calderón" in New York City, his parents moved to Harlem from Puerto Rico in the 1920s. Joe picked up the conga young, and was playing in bands by high school. Inspired by a Tito Puente performance, he started a band - the "Jose Calderon Sextet" which was later changed to the "Joe Cuba Sextet". Joe Cuba was born!
In 1965, the Sextet got their first crossover hit with the Latin and soul fusion of "El Pito (I'll Never Go Back To Georgia)". Their later hit "Bang Bang" really started the boogaloo craze.

I believe today's cut is from the "Bustin' Out" album, in which Joe starts to move beyond the strict boogaloo style.  This particular tune was edited out from early versions of the album. Why? Well, I'll leave you to figure out what "I pud-da-din cause I like it" might mean in this very silly and a little naughty song.
I don't have a lot of info on Tico, but here's the Wikipedia take:
"Tico Records was a New York record label that was founded in 1948. It was originally owned by George Goldner and later acquired by Morris Levy and incorporated into Roulette Records. It specialized in Latin music and was significant for introducing artists such as Ray Barretto and Tito Puente. In 1974 it was sold to Fania Records and stopped releasing records in 1981."
And last but not least, the clip!