This Thursday at Huckleberry! 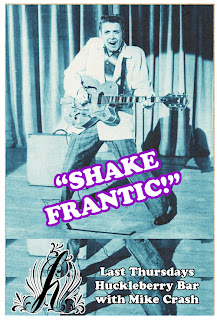 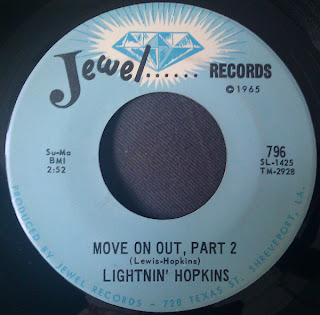 It's occurred to me that I could probably expand my readership here and my DJ profile in general if I would focus a bit more on a particular style. I guess that's always been one of my issues in life - I just like too many damn things! Right, so today it's a straight Blues record from a giant figure in that genre - Lightnin' Hopkins. I've been in a particularly Blues kinda mood lately since I decided to finally try to learn how to use the harmonica I've got laying around. My poor neighbors! 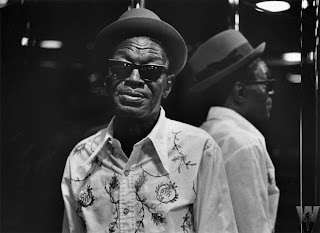 Born Sam John Hopkins in 1912, Hopkins looms large over the Blues scene and guitar history in general. After learning a thing or two about the Blues from Blind Lemon Jefferson as a youngster, Sam finally got some recognition in Houston in the mid-40's. He started recording...and recording...and recording. We've talked about some prolific cats here, but Lightnin' takes the cake. From Wikipedia: "It has been estimated that he recorded between 800 and 1000 songs during his career."
Peep this clip from the '67 documentary "The Blues Accordin' to Lightnin' Hopkins".

Hopkins died of esophageal cancer in Houston January 30, 1982 at the age of 69. His New York Times obituary named him as "one of the great county blues and perhaps the greatest single influence on rock guitar players."
Jewel Records was started by Stan Lewis in 1963 out of Shreveport, Louisiana. Initially, he put out mostly Blues material but later branched out with the establishment of sister labels Paula and Ronn. Here's an interesting comment about Hopkins and Lewis' relationship at Jewel from this great website: "Houston-based Hopkins developed a unique guitar style where he would simulate bass, rhythm, lead, and even percussion as he played solo. He also had a unique approach to recording, where he asked to be paid a flat fee for his recordings, with no contracts or royalties. He would do one take of each song, and one take only. His sessions for Jewel would usually include about 20 songs each. Hopkins and Stan Lewis got along well (an instrumental on the second Jewel album was called "Uncle Stan, the Hip Hit Record Man"), and Lewis remarked that he probably recorded more songs by Hopkins than any other artist. "
I believe Jewel was active well into the 90s.
And of course, the clip!

No comments:
Email ThisBlogThis!Share to TwitterShare to FacebookShare to Pinterest
Labels: blues, vinyl 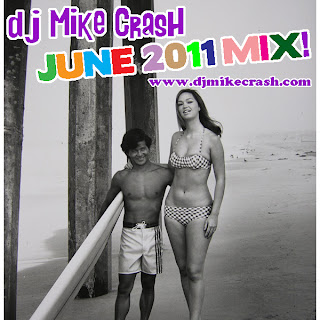 June 2011 Mix by djmikecrash
No comments:
Email ThisBlogThis!Share to TwitterShare to FacebookShare to Pinterest
Labels: djmix 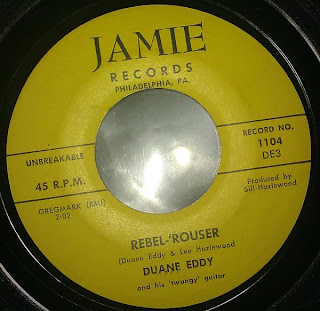 I wanted to mix it up with something a little twangier this week, and then I realized the King of Twang himself has not made an appearance here yet! For shame, Mike Crash, for shame. Well, better late than never.
Duane Eddy managed to become a guitar god in the late 50's putting together simple yet rocking little tunes like this one.  Born in Corning, NY in 1938, he was already playing guitar at 5. His sonic guise was that of a twangmaster extraordinaire, playing leads on the bass strings of his guitar to great effect.  Weird factoid: a 20,000 gallon water tank was used as an echo chamber on one of his early records, "Moovin' and Groovin'" to accentuate his sound. 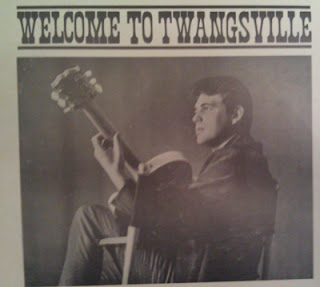 His follow-up, "Rebel Rouser" was the big hit, getting all the way up to #6 on the charts. Why don't we have instrumental hits anymore? Get cracking musicians!
The man has worked with everyone from Ravi Shankar to Waylon Jennings, and he just keeps cranking out the tunes. He was also the first guitarist to have a signature model, and was inducted into the Rock hall of fame in '94. He's still kicking around God bless him, doing his twang thang.

Jamie was another great label out of Philly, started in 1957 by Harold Lipsius. Today's record was their first big hit, and Duane Eddy basically made the label successful just by his record sales. Any of you diggers have certainly come across this label or one of their subsidiaries such as Phil-L.A. of Soul, Dionn and Sundi. I believe the label stopped releasing tunes in the early-mid 70's.

CAN YOU HANDLE IT? 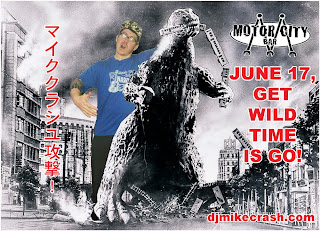 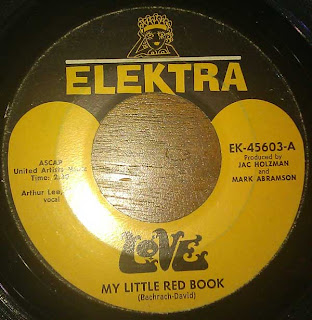 Can Burt Bacharach rock? Well, this week I'll say "yes" - but only if someone like Love covers him.
Love was an LA based Rock outfit active in the 60's and 70's. I have them under the "garage" tag but they're actually hard to pigeonhole in a specific genre with their diverse sound.
The group coalesced around Arthur Lee, who had been gigging and recording with various bands since the early 60's. Love hit the scene in '65 and quickly became popular. Random tidbit: the band initially lived in a house once owned by horror movie legend Bela Lugosi. 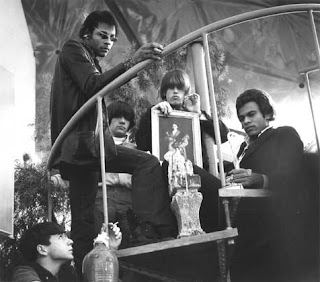 Originally penned by Bacharach, Love had a decent-size hit with today's 45, their first single with Elektra. A few moderately successful albums followed: self-titled "Love", "Da Capo" and "Forever Changes". Unfortunately, drug problems (the Legosi heroin curse?) and internal conflicts started to splinter the band in '68. Several more albums were released with a radically altered lineup. Many of the original members have since passed away or faded into obscurity, but a reformed version has toured as recently as 2009. There is a rumor that a lost album from '73 called "Black Beauty" will be released soon, I believe there are bootlegs already floating around.
And...the clip: 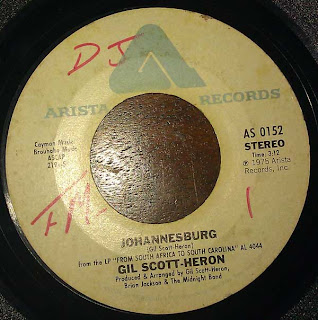 Today's post is in memory of Gil Scott-Heron, who passed away on May 27th.  He was a poet and a musician whose influence on Hip-Hop and Neo-Soul is hard to overestimate. 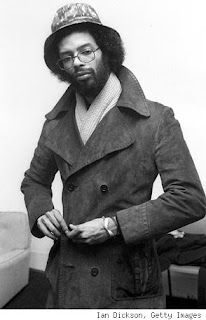 Born in Chicago but relocated to the Bronx in his early teens, Gil's writing talents were already apparent in high school. In college he started his first band Black and Blues, and wrote his first novels. Starting in 1970 he began to record, and he remained active until his death. "The Revolution Will Not Be Televised" was one of his most famous compositions, and is hailed by many as an important proto-rap song. His albums weaved elements of spoken word, jazz and soul into a style all his own. Throughout his career Gil's lyrics discussed social issues of the day, and today's song is a perfect example. "Johannesburg" speaks to the simmering unrest over apartheid in South Africa.

"They tell me that our brothers over there
are defyin' the Man
We don't know for sure because the news we
get is unreliable, man
Well I hate it when the blood starts flowin'
but I'm glad to see resistance growin'
Somebody tell me what's the word?
Tell me brother, have you heard
from Johannesburg?"
Gil wasn't without his demons. He was sentenced to 3 years for cocaine possession in 2001, and was arrested again in 2007 for the same charge. He also quietly suffered from HIV for years before going public in 2008, which may have contributed to his death.
The world lost a great poet last week. RIP Gil Scott-Heron!

No comments:
Email ThisBlogThis!Share to TwitterShare to FacebookShare to Pinterest
Labels: soul, vinyl 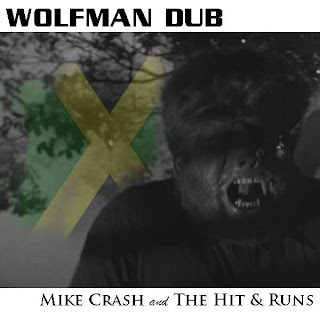 I got inspired by The Frantics' "Werewolf" and ended up with this dubby tune, listen or download the MP3 at Soundcloud!

Wolfman Dub by djmikecrash
No comments:
Email ThisBlogThis!Share to TwitterShare to FacebookShare to Pinterest
Labels: originalmusic 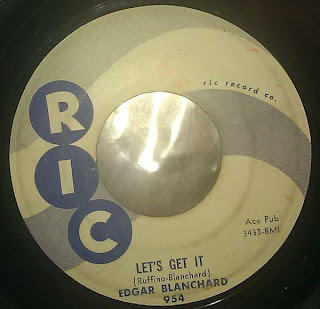 Today we've got a 45 from Edgar Blanchard, a New Orleans guitar legend! Edgar had a hand in hundreds of recordings as a performer or arranger in the 50's and 60's.  This man was a pivotal player in the NOLA RnB scene, to be sure.
Edgar was born on August 17, 1924 in Grosse Tete, LA.  Early on his family moved to New Orleans, and early on Edgar began playing guitar. It's rumored the man was gigging when he was barely in his teens! After a stint in WWII, he came back home and got to work studying music seriously at Grunewald's. The Gondoliers were formed in short order and began performing around the city by the late 40's. Around '49 or so, The Gondoliers put out their first single, "Creole Gal Blues" with Edgar on vocal duties.
The Gondoliers faded and the name was revived later with a new lineup, but Edgar was gigging and recording all along, playing with the likes of Roy Brown, Little Richard, Professor Longhair, Ray Charles, and many many more.  One record in my collection on which he appears is a personal fav, Eddie Bo's "Oh-Oh" on Chess. Edgar drops a rockin' solo here that would make Eddie Cochran proud.
Today's 45 may have been one of the first on the Ric label, I don't note any earlier in the discographies I've seen. I've selected a piece out the middle where Edgar mixes it up on this fine instrumental.
In the 60's Edgar began to have health issues that interfered with his touring.  In 1972, Edgar Blanchard passed away suddenly from a heart attack.
We've talked a bit about Ric before here on the blog, but you can also check my Wikipedia article here for more info.  You'll note Joe Ruffino, the label owner, is credited on this 45 but I'm certain that reflects just a business arrangement rather than a musical one.
And of course, the clip: